As a Software Engineer, you definitely have heard about the Memory leak concept. Memory leak is a situation where blocks of memory are located by the program remain in the memory despise they are no longer referenced. Leaks waste space by filling up pages of memory with inaccessible data. As a result, the size of memory using in your apps keep increasing, affect the user experiences and the performance of your app. Even worse, your app will be crashed randomly because a process will be terminated by the system if it consumes too much memory.
In this topic, we will discuss how the memory is managed in iOS and how to use the memory efficiently. Read on.

Most of the modern programming languages (such as Java, C#, Go, etc.) have a built-in process which automatically finds unused objects and deletes them to free up memory. The primary purpose of this technology is to reduce memory leak and let programmers focus on their business logic without caring too much about memory management.
As a high-level programming language, Swift also has Automatic Reference Counting (ARC) to manage memory using in our apps.

In most cases, ARC does its job well. We don’t usually worry about memory management. However, leaks still happen in iOS by accident. This is when two objects hold strong references to one another so that each object keeps the other one from being deallocated.

Let’s take an example, there are two classed named Person and Car.

The next code snippet will release these two instances by setting them to nil.

As you might know, once setting a variable to nil, it means there are no references to this class instance, ARC will deallocate the space of this object to free up memory. As an expectation, we should see the deinit methods of Student and Car are called. However, those two methods are never called, there are no any messages, indicates objects are released, printed to the console. This means that the foo and the car are never deinitialized.

There are two ways to break strong reference cycles in Swift. Depending on which situation we are facing, we will choose a sensible approach to solve the problem. Both methods let an instance reference to one another without keeping a strong hold on it.

Weak references should be used when the object it refers to might become nil in the future. As such, the captured objects are optional types.
In the example above, it’s appropriate for a car to be able to have no owner at some point in its lifetime, and so a weak reference is an appropriate way to break the reference cycle in this case.

Let’s make some changes to make the magic happen

Let’s run the code, there are still no messages printed to the console, it means the two objects are not released. What the heck!
Let’s trace back to our code to check what’s wrong with it.
Do you see that? There is another problem with the code: The closure.

In the above example, the Person class not only creates a strong reference cycle with the Car class but also between itself and the greeting closure. Here is how the cycle looks: 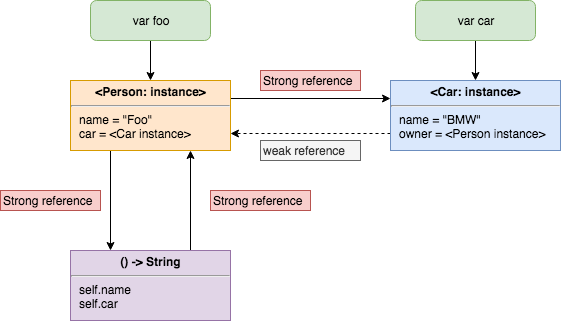 To resolve this problem, we will use “Unowned reference”. Unowned references should be used when the closure and the object it refers to will always have the same lifetime as one another. This means the two objects will be deallocated at the same time. As a result, an unowned reference can never become nil.
Let’s make some changes to make the magic happen (Again).

Let’s run the code, you should see the following messages printed to the console.

The two objects foo and car have been released and the leak has been resolved.
Here is how the cycle looks so far: 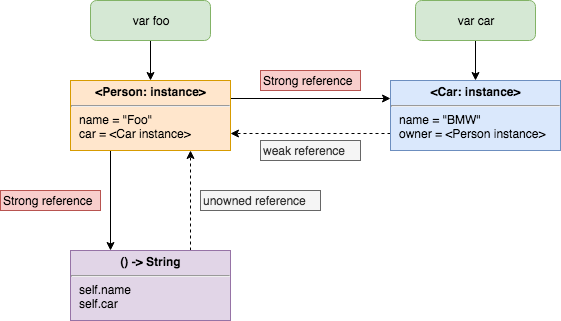 Encountering memory leaks is usually a nightmare for an iOS developer because it is too difficult to figure out the root cause. Luckily, we have multiple tools are supported by Apple to track down memory leaks.

From the toolbar of XCode, choose Product > Profile > Allocations to start a new instrument profile for tracking memory allocations. Allocations instrument tracks all of the objects that app allocates during its lifetime.
Now, press the red button on the top left in the panel to start recording. 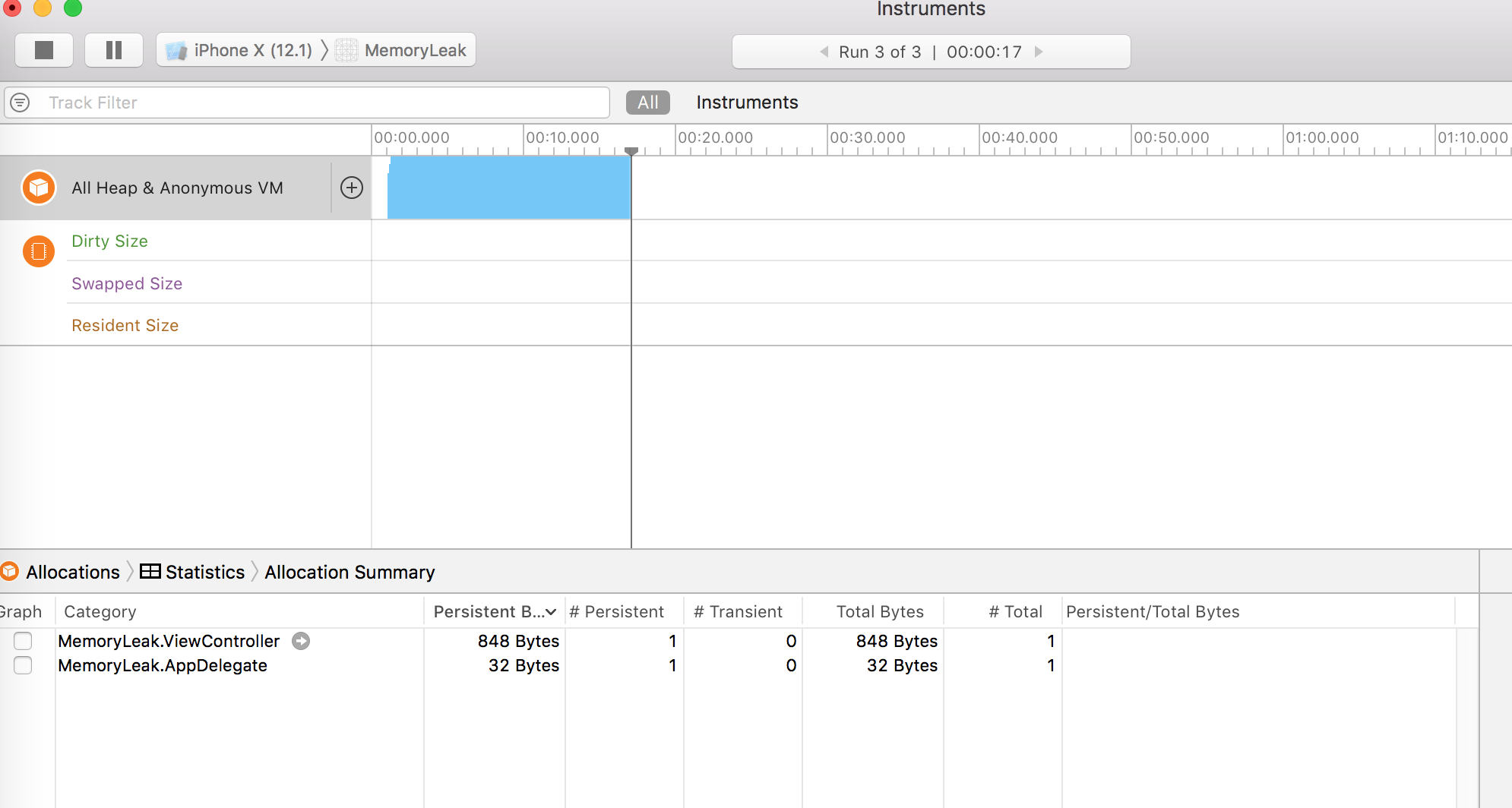 There is so many information related to memory mapping showed in the tool. To identify memory leak, we just need to focus on two main columns: #Persident and #Transident.

As you can see, the #Persident column keep increasing whenever you press to the “Create a leak” button to execute the main block. When you see something like this happend to your app, it’s time to revise your classes to find out where the leak is. 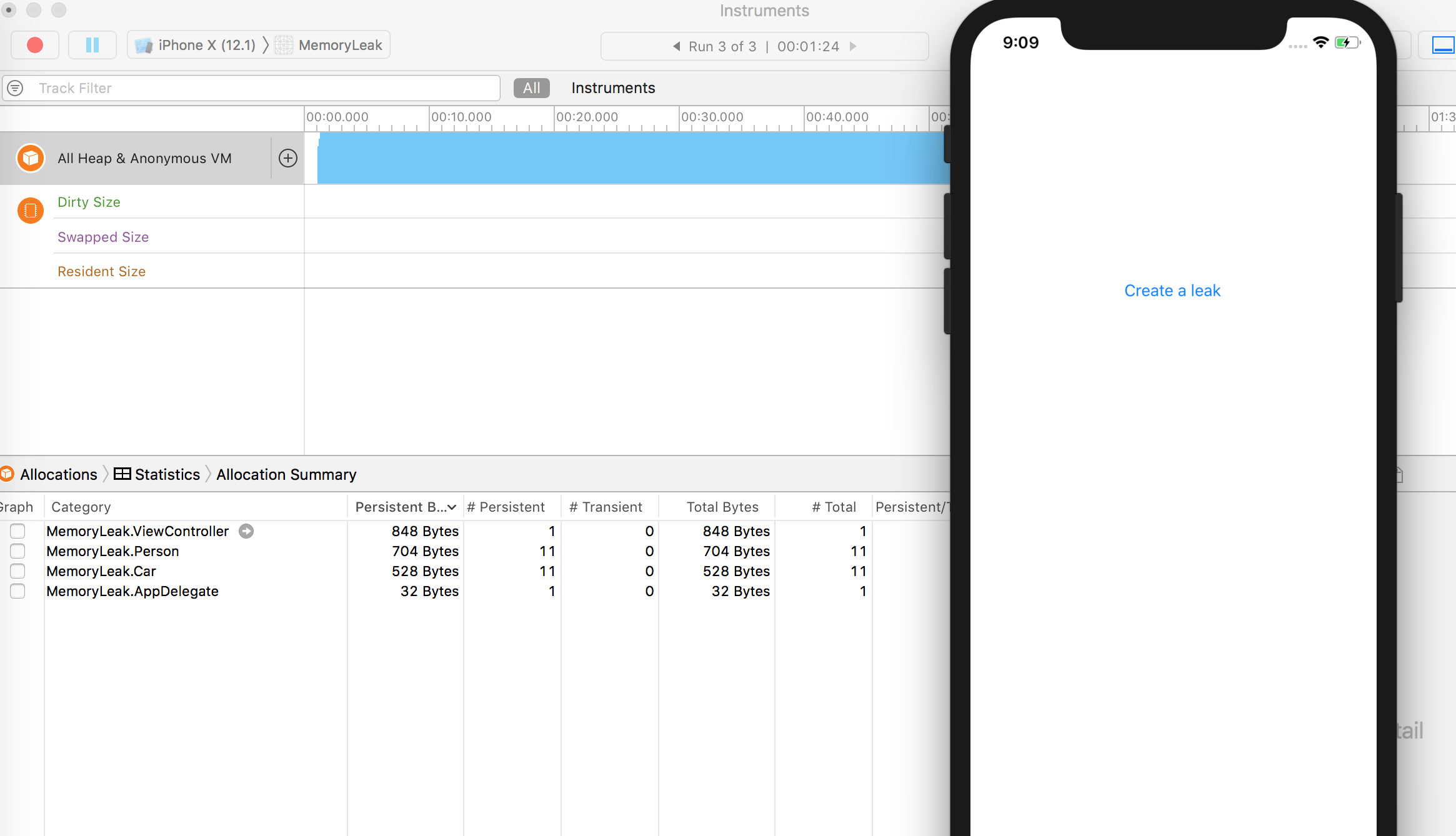 Debug Memory Graph is a tool first introduced in Xcode 8. It is able to grab leaks such as retain cycles.
From the debug navigator, click debug mode > View Memory Graph Hierarchy to visualize the memory mapping 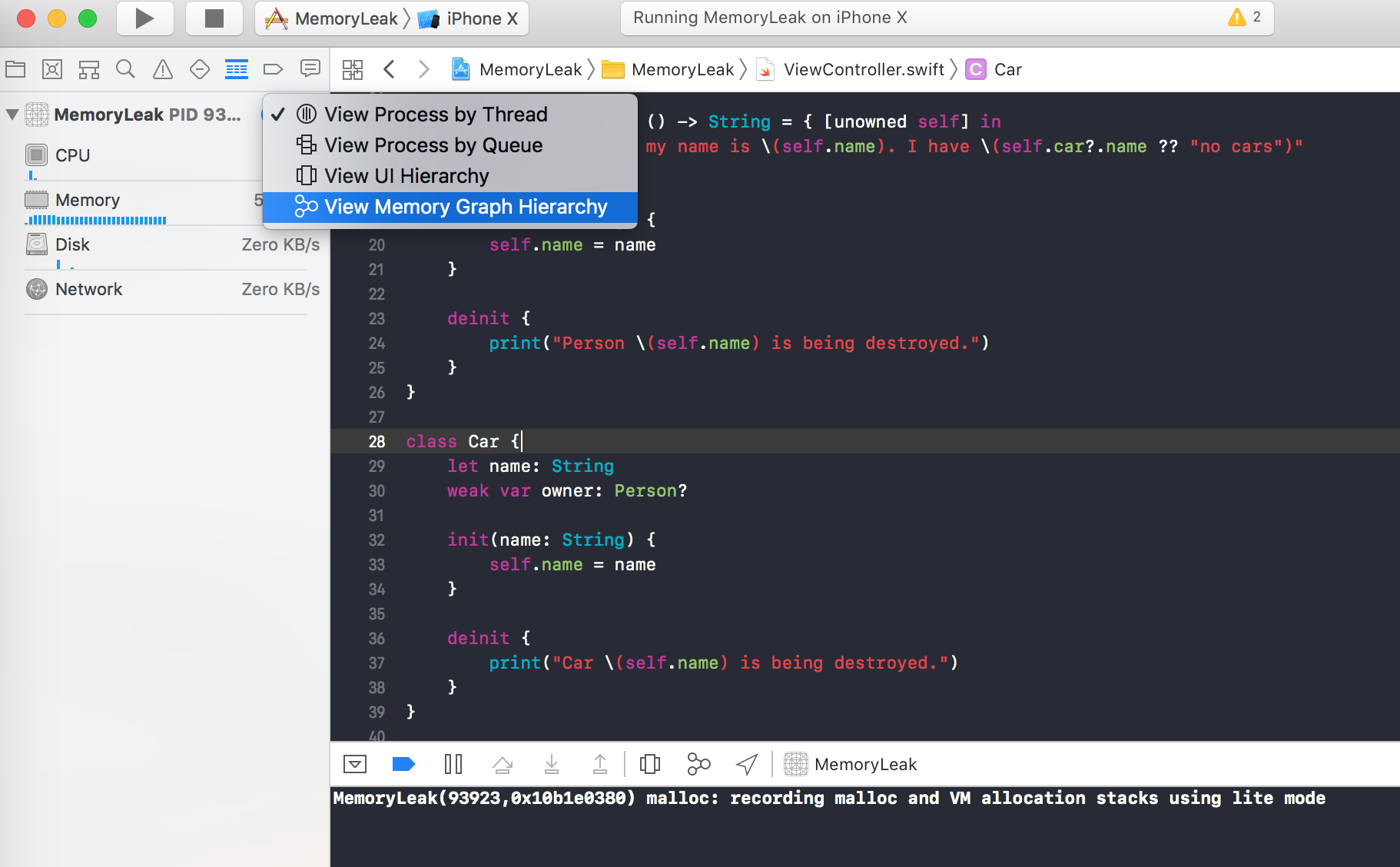 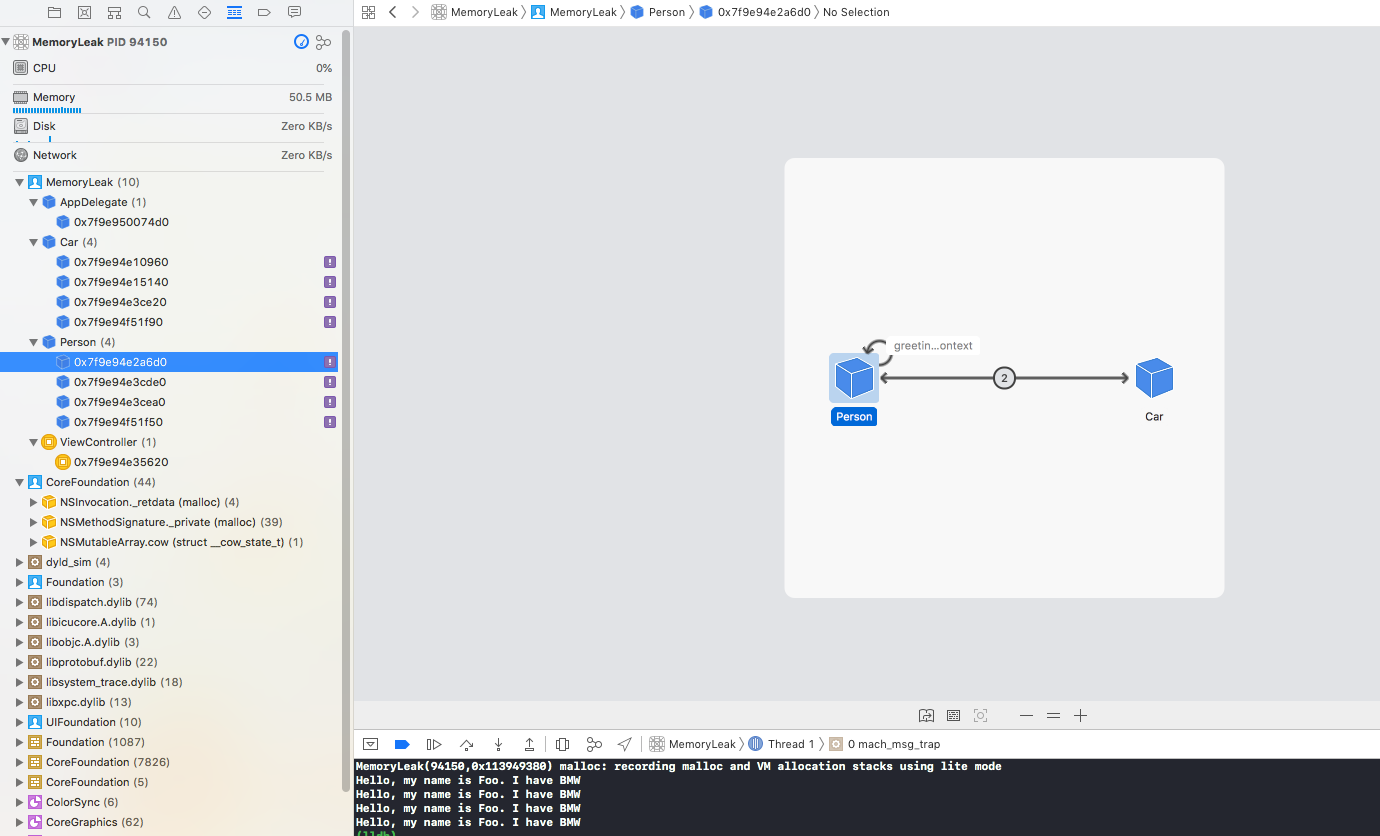 From the visualization, we can see there are two strong reference cycles come from the Person-Car relationship and from inside the Person itself.

Every iOS developer should have a deep understanding of how ARC works to avoid memory leaks. Undeniably, a good management of memory contributes to the app performance and the user experience. Hopefully, all of the concepts we walk through in this article will help you build apps that have the best performance. Feel free to leave your comments here.